In a recent interview, the Wall Street Journal's Lettie Teague asks 750 Wines' Owner, David Stevens a few questions... WSJ: You’re famous for your ability to find, and feature, future superstars. What’s your latest find? DS: Carte Blanche - it’s made by Luc Morlet (former winemaker of Peter Michael) at a winery owned by Nicolas Allen. It was just released two weeks ago and we have the exclusive retail offering (NB: $75). It’s a very lush, mouthfilling Chardonnay, much in the Peter Michael style. Wall Street Journal Wine

Meanwhile, back at city life, there was a private tasting and preview of the already well-reviewed four new wines from CARTE BLANCHE at a midtown club. Hosted by his brothers Andrew Allen and Christopher Allen, Nicholas Allen introduced the select crowd, CARTE BLANCHE’s Chardonnay 2008 and Proprietary White 2009 from Sonoma and two wines from Napa:  Cabernet Sauvignon 2008 and  Proprietary Red from that same year. The guest list was made up of friends, family and business associates from the worlds of finance, investment, philanthropy and the arts, including Stephen Farrelly, Jake Ward, Will Krusen, and Tripp Ridder, among others.

November 13, 2010 Tampa, Florida:  Our sincere gratitude to Kevin Pelley and Bern's Fine Wine & Spirits for hosting the Carte Blanche tasting for our Tampa friends and family! We very much appreciate all who attended and our Florida supporters. View Photo Gallery November 19, 2010 Manhattan, New York:  Many thanks to our hosts, Andrew Allen and Chris Allen, for organizing the Carte Blanche tasting event for our New York friends and family! Additionally, thank you to the member host-committee of Stephen Farrelly, Jake Ward, Will Krusen and Tripp Ridder. Our sincerest gratitude to John Samayoa and the Club for its tremendous hospitality. We very much appreciate all who attended and our New York area supporters. View Photo Gallery at PatrickMcMullan.com 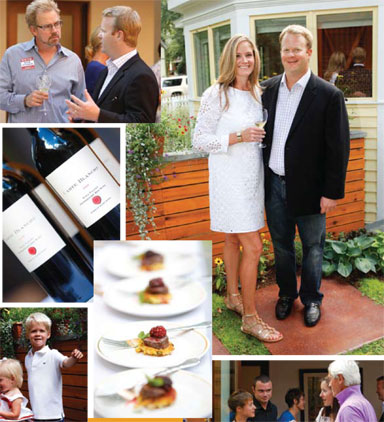