Top scores from the editors at Wine Advocate, Wine Enthusiast, and Wine Spectator reflect a powerhouse harvest from 2009. Wine Advocate 2009 Cabernet Sauvignon  94 "The 2009 Cabernet Sauvignon caresses the palate with deep layers of dark red fruit, rose petals, smoke and espresso. It is a bit more voluptuous and sexy than the 2008 in its sleek, polished personality. All of the elements flow gracefully to the huge, textured finish." 2009 Proprietary Red  93 "This is bigger than the 2008 but not quite as delineated. It makes up for that with gorgeous richness and balance. The 2009 is 47% Merlot, 29% Cabernet Sauvignon, 19% Cabernet Franc and 5% Petit Verdot." Wine Enthusiast 2009 Cabernet Sauvignon  94 “This is the very definition of a modern cult-style Napa Cabernet. It’s extraordinarily rich and flavorful in blackberries, blueberries, cassis and chocolate, while the jacket of tannins is as soft and velvety as modern winemaking can achieve.”  2009 Proprietary Red  94 Wine Spectator 2000 Cabernet Sauvignon  93 "Rich and spicy, deep in plum- and currant-laced fruit, with touches of sage and licorice. Maintains its strength, while easing into a more supple ending." 2009 Proprietary Red  93 "Beautifully made, rich and fleshy, delivering dense, complex layers of red and black fruits, with blackberry, wild berry and boysenberry flavors. Intense and persistent, with a long, persistent finish."
The 2009 vintage wines are just beginning to open up, letting us see what they’re made of--power and finesse with unwinding layers. The 2009 Carte Blanche wines will age gracefully and reward those with patience. Over the next three to five years the wines’ tannin will begin to soften and open the door to the fruit’s evolution.

HOT OFF THE PRESS:

THE FOOD & WINE CLASSIC IN ASPEN

The 30th-year anniversary of the Food & Wine Classic in Aspen raised the bar (and many glasses), yet again! In addition to a dizzying amount of incredible seminars (the 10-vintage retrospective of Taittinger's great Comtes de Champagne and the Hermitage and Cote Roti with Michel Chapoutier were among my favorites), we kicked off the Classic with our first Aspen Carte Blanche vintner dinner for 18 people in the elegant wine room at Syzygy restaurant. Five of our wines (in addition to some surprises from my personal cellar) were paired with cuisine by new Executive Chef Keith Theodore. Additionally, we hosted our second private tasting at the Hyatt Grand Aspen. Guests sampled our newest portfolio and were entertained by bluegrass prodigy Bella Betts, daughter of master sommelier and mezcal master Richard Betts. The sun was shining, the music was captivating, and the wines were paired with incredible fare by acclaimed chef Alison Richman of The Rabbits Garden. We thank our guests and sponsors (Aspen Peak magazine and WorldLife water), in addition to Gregg Hemming of The Grape Bar, and the Hyatt Grand Aspen, for their continued support! Check out our online pics.

Stephen Tanzer's International Wine Cellar reviewed our 2009 Bennett Valley Three Peaks Syrah, giving it a 92-point rating, noting the “perfumed nose combines blueberry, blackberry, spicy black pepper and crushed rock. Juicy and classically dry, with a penetrating saline quality to the black fruit and spice flavors. A hint of strawberry from the Grenache perfumes the lingering aftertaste. Finishes with broad, serious, chewy tannins. Very good syrah, not a bit over the top.” Not your typical domestic Syrah, this wine is a high-elevation, cool climate Bennett Valley Syrah/Grenache vineyard-designated blend that hails from Judge Vineyard. With 13.7 alcohol only, it's food friendly and elegant.

We were honored to participate in Bruce Nichols’ 2012 National Meeting of the Société Mondiale du Vin USA and National Young Sommelier Competition, held at Napa Valley’s historic Silverado Resort and Spa (May 3-6). Carte Blanche was poured at the 2012 Taste of Napa Valley event, and info on this incredibly successful event was emailed to the 6000 members of Mondiale du Vin, part of the prestigious Chaîne des Rôtisseurs, the world’s oldest international gastronomic society. Founded in Paris in 1248 (what history!), it celebrates the marriage of great wine and food. 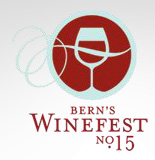 This event has fast become one of the highlights of our event circuit, and once again Bern’s Winefest surpassed the year before. The weekend is chock full of events and networking, including a Gala Winemaker Dinner, the Winefest Saturday Soiree, Sidebern’s VIP Party,  Bern’s Winemaker Dinner, and the sold-out Grand Tasting, where Carte Blanche poured. The weekend showcased exquisite cuisine. Thank you to Kevin Pelley and our friends and supporters at Bern’s and in Tampa!

For the special 20th anniversary year, Carte Blanche and Keplinger Wines donated an auction lot for a Top Chef & Vintner Dinner at Nick Allen’s Positano Long Boat Key beach house. The lot raised $10,000 for the High Museum of Art. Known as one of the top fundraising events in the South, this event is also the fifth largest charity wine auction in the country. As stated in Wine Spectator, it’s also considered the top wine auction to benefits the arts. Funds generated from the auction—exceeding more than $19 million over the last 19 years—contribute to the Museum’s exhibitions and educational programming.

Nick Allen was happy and proud to support some family schools this year by sponsoring and donating wine and auction items to the following Tampa events: St. Stephen's Tasting & Toasting (March 31), and St. John's Celebratio (April 14).

Gaudiosa 2012: An Evening in Paris

Carte Blanche participated in a festive benefit event for Tampa’s Jesuit High School. Held at the Hyatt Regency in downtown Tampa, the annual gala and auction raised money that goes directly to financial aid that helps almost 1 in every 3 students that attend Jesuit. Drawing more than 600 attendees, including Jesuit High School alumni, parents, and supporters, the event included Carte Blanche’s donation of two lots to the successful auction, and helped raise $1800 for this important cause.  Check it out.

The special 10th anniversary year of this important Naples event was a huge success, with more than $600,000 raised in support of the Shelter for Abused Women and Children in Naples. Held at the Ritz-Carlton, 1000 supporters attended the main luncheon, bidding on more than 150 silent auction items. Carte Blanche was an event patron and donated two magnums (2008 Cabernet and 2008 Proprietary Red) for the men’s live auction held at the Old Collier Golf Club. We are very honored to have helped raise $8,500 for this important cause. The Miami Dolphins’ Victor Rivas Rivers was the keynote speaker at the main event, speaking on his triumph over childhood abuse and adversity.